Leap year Runday winner was considered “weak” at school, but look at him now 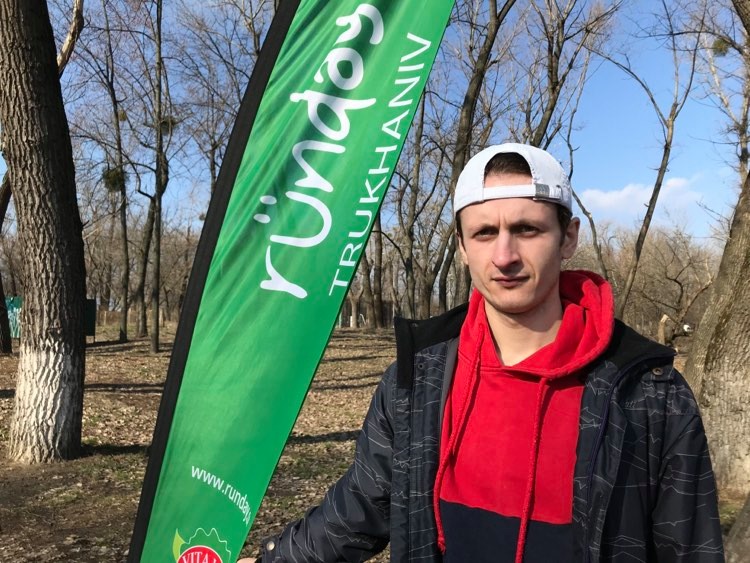 25-year-old Ivan Polukhin has finished the February 29 Runday at Kyiv’s Trukhaniv Island first. With the finish time of 18 minutes and 5 seconds, he frowns at not having done it faster.

“All I want is to run faster, all I care about (during runs) is my personal time… When I arrive at Runday, I am not looking to compete (with anyone),” he says.

“I would be happy even if I was the last to finish, as long as I show a good personal time.”

Such sports accomplishments weren’t always the case for Ivan.

“At school, I did not run at all,” he recalls. “I was considered weak at PE lessons. And overall, I had a bad relationship with sports.”

His interest in running transpired when he heard about the 2013 Boston Marathon bombing in the U.S. He started running regularly since then.

Fast forward five years, and Ivan learned about new ways of running – surrounded by likeminded people, support, and fun. His friend Amy who works for the Peace Corps told him about Runday in 2018.

“I didn’t even know that these things existed!” he gushes. “I knew that there were running clubs, but that every Saturday there would be soulmates gathering to run…”

Since then, Ivan’s been attending almost every Runday. His favourite thing about running is the feeling of freedom.

“Sometimes you don’t want to run at all: it’s difficult physically and mentally. You force yourself through the entire run. But then you feel that it was all worth it,” he says.

Commenting on personal running progress, he says that there is room for improvement. Despite having a Runday personal best of 17 minutes and 39 seconds, he says he wants to get even better.

“When there is desire and motivation, impossible is nothing.”